I tend to watch comedies because there’s already a substantial amount of drama and action in my life and I desperately need the comedy to round it out. My husband likes history too, so we’ve been watching this ridiculous comedy on Hulu called Quickdraw. Despite paying actual currency for a Hulu Plus membership, you’re still subjected to watching a slew of ads – usually 3 at a time. I typically spend that time wondering what the heck I’m really paying for anyway.

During one of the forced ad breaks before my irritation set in, they played an ad I hadn’t seen before. A teenage boy walks through his front door, he and his dad exchange a high five and a “Hello,” and after closing his bedroom door he lies down on the floor looking at his phone that’s playing the song we hear. It didn’t seem like an ad I cared about much so I checked something out on my own phone. When I looked up at the TV again I was stunned to see the boy had put on makeup while wearing women’s clothing. It was a YouTube Music ad.

I wasn’t stunned because I’ve never seen men in women’s clothing before or that I was offended, but because you don’t see such things in mainstream media. You especially don’t see big companies like YouTube stepping foot near topics like that. It was enough for me to say, “Was that what I think it was?”

Though Hulu vomits ads upon you, one thing you can’t do is replay the ad if it has moved on already. Presuming I’d be able to find the YouTube Music video on YouTube (thank you, Internet!), I found the ad easily and discovered Hulu only showed half of it.

It starts out with a normal teenage boy closing out his shift at a local drive-in. He meets up with a girl afterward; they have a brief laugh, but when she smiles and goes in for a hug he has a haunting, emotionless expression on his face. 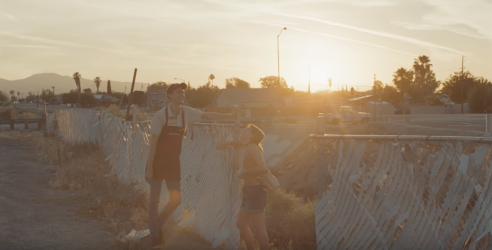 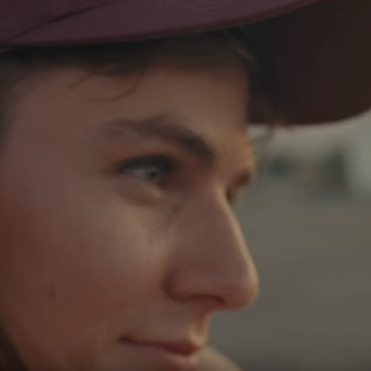 Like many teenagers, he drove himself home in his modest, compact car. He’s playing ‘Club Now Skunk’ by Elliphant – an upbeat, booty-shaking jam – at high volume as he comes to a stop at a red light. A large pick-up truck carrying two guys around his age pulls up next to him; they give him an intimidating stare-down as he shrinks and looks away.

He goes straight home, and that’s when he walks through the door, greets his father, and we learn his name is Alex. They don’t show the beginning of this ad on Hulu, which doesn’t exactly provide all of the relevant context.

From this point on, the same song is still playing loudly and the rest of the ad is carried out with no speaking at all. The camera pans down his bedroom wall where “Give All to Love | Obey Thy Heart” is written in glitter, and it shows him on his back staring up at his phone. The next shot is of the phone propped up while she’s shown putting on eye shadow, eyeliner, mascara, and lipstick in her vanity mirror. 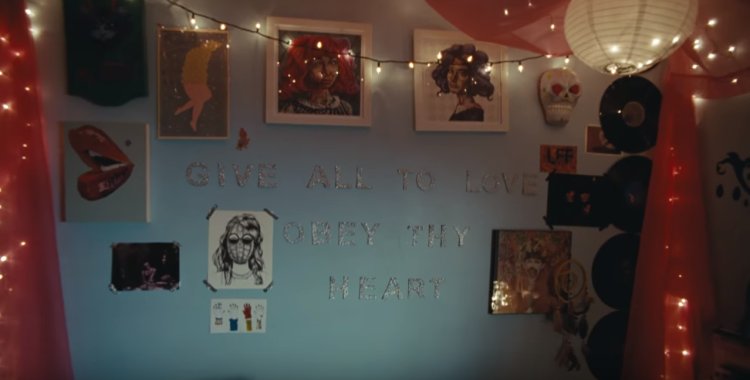 They reiterate that this is, in fact, a commercial about a music playing service, so they add another shot of her phone propped up in a sea of bracelets, sunglasses, lipstick, and eyelash curlers.

With makeup perfect, she rips open her silk bathrobe and dances to the rhythm of the music. In another frame she lifts her head with a lush, blonde wig, and pauses briefly looking in the mirror. The way her gaze lingers, it’s as if she’s really seeing herself for the first time.

Finally ready for wardrobe, she tries on an outfit she likes as “It’s Not Just What We Listen To” is shown on the screen. Like many women, she ended up changing her outfit and as she pulls down the new fishnet top over her bra the text changes to, “It’s Who We Are.” Flinging her jacket onto her shoulders, the “YouTube Music” logo appears and she whisks away out the door. 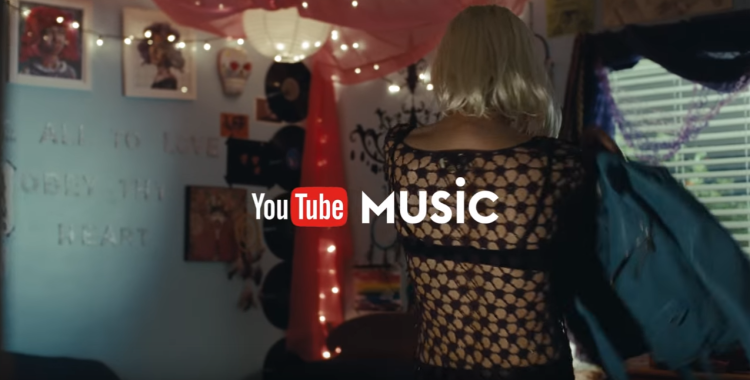 What is interesting is there is no evidence that this person is transgender. The only thing we really see is what appears to be a cis male crossdressing. The difference between these terms, and many others, is very challenging for some people. Being transgender is having a body that does not match one’s self-identity. Crossdressing is wearing the clothing typical of the opposite sex. Sex and gender are often confused as well; sex only meaning male or female based on biological sexual organs, and gender referring to identity.

CROSSDRESSING DOES NOT ALWAYS INDICATE HOMOSEXUALITY – did you know that? An ignorant first reaction to cis male crossdressers is that they are ‘gay.’ This is an incorrect generalization, please do spread the word. Female to male crossdressers are more rare, but it’s easy to see why male to female crossdressers do it – ‘girl’ stuff feels awesome. And it’s naughty. That in NO WAY indicates that they have any interest in having any kind of relations with other men. Understand? Here’s a little graphic for anyone who needs a little guidance:

So we’re unsure what Alex’s sexuality is, but it doesn’t really matter. Maybe Alex is even gay and loves dressing in drag. All I know is I was actually elated to see how YouTube Music humanized this person because they exist all over the world. There are millions of souls born into the wrong body, and it was not by choice. The reality is that people really do exist who have to live a lie just like Alex may have been – pretending to be someone else during the day, having unfulfilling relationships with someone who doesn’t know, being bullied because they look different, and feeling like a shell of themselves. The fact that such a huge organization recognized that these people need a louder voice was so inspirational to me, I had to see what people were saying about it and wondered why I hadn’t heard anything yet – it was released 4 days ago.

I couldn’t believe what I read in the YouTube video comments.

Instead of finding cheering, celebration, or at the very least some respect for making such a bold move, I found hate. Lines, upon lines, upon lines of pure hate, disgust, and repulsion. No one was happy for the trans/crossdressing community, they were shunning them. Again.

As if it couldn’t possibly get worse, it did anyway. People began making statements about how crossdressing and being transgender is actually a MENTAL ILLNESS. And not just mental illness, but mental illness ‘horse shit.’ I could not believe the blasphemy. I wish these people understood how their hate spawns the hundreds of LGBTQ suicides across the globe.

One thing that I can’t stand about the Internet is how it is a platform for anyone to be heard when they speak. There are no regulations for what to say, how you should say it, and if you’re offending millions of people. I was taught to only say something if it’s nice, but it seems that many people didn’t receive that same lesson.

What I still can’t understand is why anyone feels it’s their obligation to judge what someone else does. Where is the line? If you’re judged for who you’re attracted to, what clothes you wear, and who you marry, why aren’t we judged for the cereal we eat or the movies we watch? What gave the ‘majority’ the right to say that the LGBTQ and crossdressing community is wrong?

And remember how I said ignorant people associate crossdressing with homosexuality? It didn’t fail me here:

This ad was so ‘offensive’ to YouTube users that Spotify may be getting some new business.

Twitter is usually a pretty intelligent place, so I checked for comments there with hope that I’d find something positive, but I was out of luck there too. 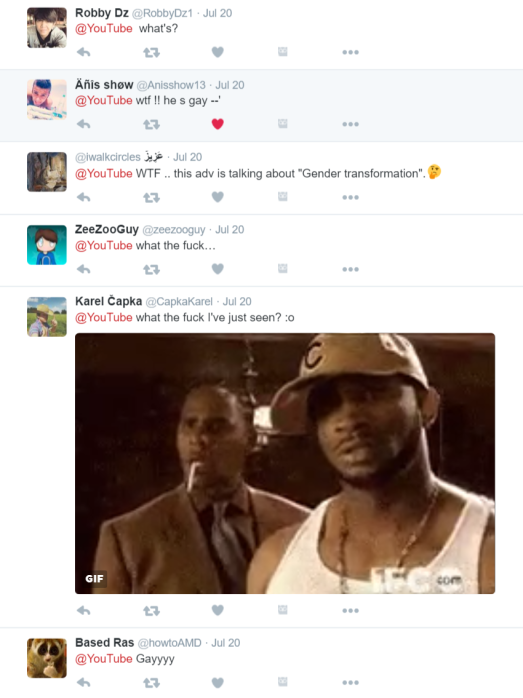 The fact that YouTube Music created this ad was incredibly bold and I applaud them for standing up. While the LGBTQ community does seem to take one step forward and two steps back with ‘normalization,’ we are in fact making progress.

I wrote this not to be negative, but to illuminate that there is a silver lining to this. Even though there are still people who not only don’t understand but also can’t keep their opinions to themselves, just the fact that this ad was created means that we’re slowly winning. With slow but steady steps such as Massachusetts passing a ‘gender identity non-discrimination’ bill, people are going to have to listen.

Despite having only a few words in this ad, it speaks utter volumes as to how things need to change.

Above all, Obey Thy Heart. 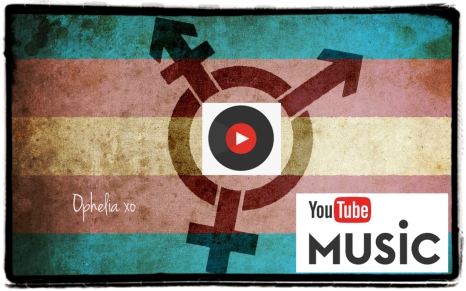 You can watch the full ad here:

Subject Unsuspecting People to This Blog:

Hey! I'm Ophelia. You've just entered a safe space! Here, we talk about depression, sex, and cannabis openly and honestly without judgment. It's time we stop vilifying these natural subjects which have grown to become taboo. When depression is mislabeled as laziness, we encourage suicide. When sex is taught to be shameful, we promote rape culture. And when cannabis is prohibited, ailing people suffer without access, or worse, are jailed.​ I have a Bachelor of Science degree and have spent my adult life researching and experimenting with these topics. I've made it my mission to dispel myths by using science, and to give others hope by sharing my experiences.​ Lives are destroyed or lost when we choose to not talk about the difficult things. But we can do better. Start by Speaking Out on the Unspeakable! @FearlessOphelia FearlessOphelia@gmail.com View more posts